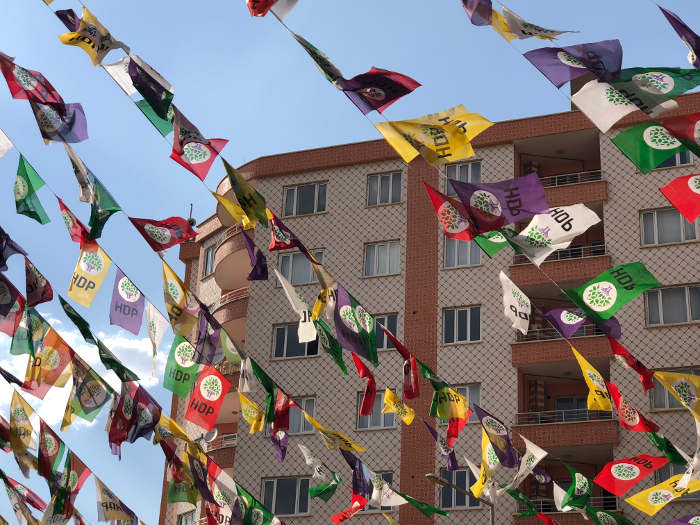 We arrived in Turkey after an urgent call by the HDP to come and monitor the 2019 local elections. Walking through the streets in Turkey, you could be forgiven for thinking that you’d entered a dictatorship. Turkish flags and pictures of president Erdoğan adorn every lamppost. The state attempts to present itself as a democracy – but eyewitness reports from previous elections show that this couldn’t be further from the truth.

While it is possible for the ruling AK Party to lose an election, in reality elections are not conducted freely. The vast majority of the broadcast media is controlled by the Turkish state, and the country is described by Reporters without Borders as the largest jail for journalists in the world. Under these circumstances, it is impossible to have a free and fair election.

Problems at previous elections have included vote rigging, as well as issues with voting lists including people being registered to vote multiple times and a voter aged 165. This is in addition to violence and intimidation at election booths by both police and military.

The day before the election we listened to a speech by Batman MP Feleknas Uca. She told us:

“Before, in different elections there were leaks that thousands of new voters were registered in the Kurdish region. Not only were imaginary voters produced, but also police forces could vote in the Kurdish region in order to change the election result. For example, in Lice, in a previous election, only 23 voters were registered in a village. But 94 votes were in the results… Soldiers and the police had been voting for the AKP in that village.”

After the attempted coup in 2016, the government seized control of municipalities, replacing 94 HDP mayors with AKP kayyums (‘trustees’). A large number of elected mayors, including all those from the big Kurdish cities, were imprisoned.

The HDP is optimistic that it will finally win back their stolen seats. Feleknas Uca went on to tell the international delegation:

“The future of the country will be decided on this election. On one side, there is the coalition of the AKP and MHP. On the other side, democracy…Tomorrow the destiny of 81 million people will be decided.”

We travelled to Karakoçan, Elazığ province, to monitor the election. As a majority-Kurdish area between Bingöl and Dersim, HDP members were optimistic that this year they might beat the AKP.

In the 2014 local elections, the HDP-affiliated party won in Karakoçan. But we were told that the HDP co-mayors were replaced by an AKP kayyum.

We visited 7 polling stations in and around Karakoçan. In the early morning, we found that we had much more freedom of movement. But as the day progressed, the police became increasingly angry with us and we weren’t able to enter polling stations. Our car was also stopped at a checkpoint outside of the town and our passports were briefly taken. Here is a breakdown of our experiences at the polling stations:

We started at 7am arriving in the school just as the booths were opening. Three uniformed police officers were standing inside. We were quickly escorted out and told that we weren’t allowed to go into the rooms where the actual voting was taking place.

We beat the police to this polling station. We were allowed into one of the rooms and checked that the voting box was sealed.

Arriving at 7.30am, one police car was parked outside the school. There were two uniformed police officers inside. We were able to enter one room and checked that the voting box was sealed.

We were welcomed into two rooms, checking that the boxes were sealed. As we tried to enter the third room, police officers finally realised that we were inside, and angrily escorted us out. They detained us for five to ten minutes, took our passports and asked our translator questions. They told us that were are not on the list of people permitted to enter the rooms, and that we could go into the schools but not enter the actual rooms.

We visited this polling station twice. Arriving early in the morning, we were allowed into one room. The box was sealed. The police took photos of our passports.

We visited a second time at 2.45pm. The police were more angry this time, escorted us out immediately and once again took our passports.

We arrived at about 9.30am and were welcomed by those working at the polling station. We were allowed to sit in all three rooms and checked that the voting boxes were sealed. There were no uniformed police at this polling station, though we were certain that there were plain-clothed undercover officers.

A lot of old people came out to vote in this village. The school is inaccessible for people with mobility problems, so the HDP had organised transport and help for those who needed support getting into the polling stations. One woman was carried up the stairs to vote on an office chair.

We visited this polling station at 3pm, along with members of the HDP, including one of the MPs for Amed. Outside the building, a group of plain-clothed police officers immediately surrounded us, took our passports and one delegation member’s press card. They asked us why we were in Karakoçan, and whether the town meant anything to us. They detained us for ten to fifteen minutes, and then told us that we weren’t on the official list. It was very clear that the police did not want us to go near this building. They told the HDP that we wouldn’t be successful in getting into any more of the polling stations in Karakoçan.

In Karakoçan, the AKP won the municipal election, with 48% of the mayoral vote going to the AKP and 32.6% to the HDP. Having spent time in the town and having met many locals, this result seemed, at least, highly questionable.

In Ankara, the CHP’s Mansur Yavas managed to oust the AKP candidate, ending the long dominance of neo-liberal Islamist parties.

In Istanbul, where president Erdoğan first began to build his reputation as mayor, vote-counting was halted when it became apparent that the AKP might lose. At the time of writing, results show that the CHP’s Ekrem Imamoğlu has defeated the former AKP Prime Minister Binali Yildrim by a hair’s breadth. The AKP is, of course, contesting the results in both Ankara and Istanbul.

There is no sense in which these local elections were free and fair or conducted on a level playing field. Particularly in the Kurdish regions, there was an intimidating police presence and, in lots of cases, a military presence. The state’s refusal, in many areas, to allow independent international observers to monitor the voting process speaks volumes, and the overwhelming dominance of the ruling AKP on broadcast media left very little space for opposition voices to be heard.

Despite these serious flaws, the majority Kurdish provinces overwhelmingly voted to replace their kayyums with elected HDP representatives, and the AKP lost its foothold in major cities like Istanbul and Ankara. These results do not bode well for the AKP’s future prospects – at least not if Turkey can hang on to the last vestiges of its democratic system.

View all posts by pikcampaign